My girlfriend had friends in town, and we have decided to go for dinner together. To my surprise, she suggested meeting for dinner in Samarkand restaurant, a traditional Uzbek restaurant on Prague’s outskirt. I didn’t know how big the pub crawl through Prague this would be at that time.

Samarkand restaurant is not directly on the metro line. Instead, you need to leave at Strašnická Green metro stop and then continue by 10 minutes convenient tram ride to the Zborov – Strašnické divadlo stop.

Note: Like many other Central Asian minorities such as Kazakhs or Tajiks, Uzbeks form a big labour community in Prague. However, discovering the places where they develop their community is challenging even for locals. And Samarkand restaurant is such a place.

We come to the restaurant right on time, and we greet with girlfriend’s friends. The restaurant is nice and cosy, full of traditional Uzbek folklore and paintings depicting the famous Samarkand Bibi-Khanym blue mosque enlisted in the UNESCO heritage list.

Stuff ware welcome. However, the waiters were not paying us and our table much attention from the start. Our table was not what you would expect in the traditional sense of a restaurant table. We sat on the floor behind the big square tea table with my girlfriend and her friends. As support, we were surrounded by crochet pillows. On the other side of the table, a few meters away, sat another Uzbek family with their little child. By other tables were families with elderly people; one family spoke Russian and another Czech.

The food menu was straightforward and modest. While I didn’t want to cause any trouble for my partner, I also wanted to test the restaurant and order a beer. There was no problem with my order which surprised me as Uzbekistan is a Muslim country. Overall, we ordered traditional regional food such as plow or shashlik. 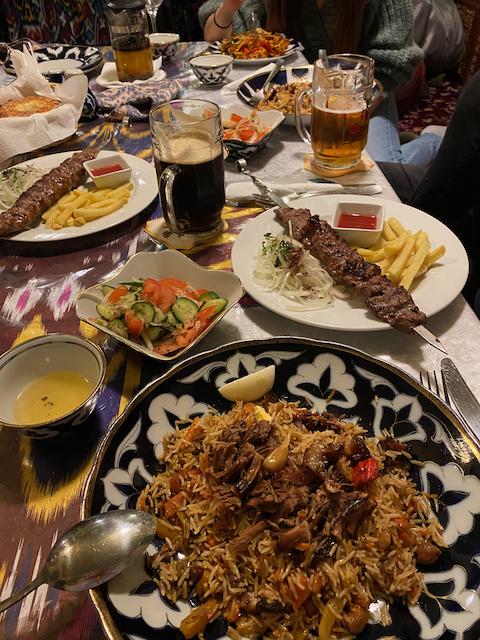 Frankly, I would recommend this restaurant to locals. If you live in Prague longer and want to discover something new, come here for one meal or two and taste a different culture. On the other hand, this will be probably nothing interesting for outsiders. After we paid staff didn’t care about us, and they didn’t even say farewell when we were leaving. So that was a little bit disregarding.

I felt the restaurant was a little bit understaffed. They could surely increase their tips if the staff cared more intensively about their guests. Also, while my girlfriend and her friends talked to the waiters in Russian, I doubt the staff would be fluent in English.

We planned to end the night after we left the Samarkand restaurant. However, suddenly somebody in the group suggested spending a little more time together as another friend reunion does not look promising in the foreseeable future. I liked my girlfriend’s friends and ordered Uber so we could continue. We headed to Vinohradský pivovar. As always, I chatted with an Uber driver. The guy was somewhat right extremist, and we immediately had different views. Still, I left him a tip as I always do. But I hope I will never meet him again.

At Vinohrad parliament [Vinohradský parliament], we were seated in the big concert hall, next to the stage. Fortunately, no concert was planned that night, and we didn’t need to pay any entry fee. Even though the hall turned full during the night, there was no pressure from waiters on us to leave. We had several rounds of beer and soft drinks. We tried Duna’s Melange IPA and light Jantar beer from local brewery. I also ordered traditional Czech pig fat spread with bread. However, the appetizer didn’t receive much attention within the group. Eventually, I ate it alone.

Sometime around midnight, we took just one last round of beer and decided to leave. When we were saying farewell to each other, somebody suggested again spending a few more minutes together. We all agreed and took a ride downtown to Palladium shopping centre (also Yellow metro line station) in a good mood.

Palladium should be our terminus where we wanted to take one last drink before saying goodbye to each other. We ended up on the upper floor of ROXY Prague club. Immediately I was not too fond of the place. It was super crowded and looked dull. Moreover, anybody could come and go despite the security standing at the door. They couldn’t care less about their jobs. People had their stuff lying all over the place, and nobody was paying attention to pickpocketing and thieves. Seriously, security couldn’t care less and was leaving somewhere frequently.

The only curious thing about the place I remember till today was the giant bone above the bar. And frankly, that is not enough for a pleasant experience, and Google reviews agree with me.

Rather than spending money in a crowded ROXY Prague bar, we walked down to Lokál Dlouhá. It was shortly after midnight when we came to the restaurant. It started to get empty. We took the last round of beer, and each had a shot of rum or spirit. Shortly after that, we said fear well to each other and decided to go finally. I asked my girlfriend to take a walk with me through Prague’s Old town to Malá Strana. “We will get sober,” I said in early January midnight.

We walked along with the Vltava river band and got over Charles Bridge. It was precisely 1 AM when the city turned off Prague Castle and Charles Bridge tower lights. We got on the other side of Charles Bridge and waited for our Uber home. The driver had an issue while Malostranské square was currently under reconstruction. The whole area turned into a maze of one-way streets. Eventually, he needed to make a giant circle around the river as everything was heading in one direction. After that, we hopped in and rode with Uber home.